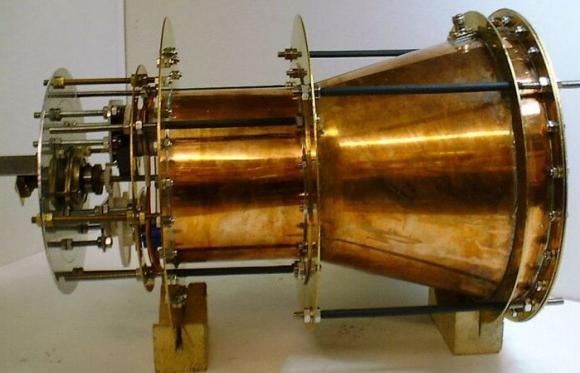 A reaction-less drive would be great to accelerate spaceships because they don't need fuel for the propulsion (like rockets or ion-drives).

The main part of the device is the resonant cavity. The Cannae Drive generates microwaves inside the chamber which bounce off the inside walls of the cavity and generate a thrust in direction of the bigger wall. Several prototypes where produced and tested, but the generated thrust force is very small:
MARCH 3, 2014
Cannae conducted testing on a non-superconducting Cannae Drive with the NASA Eagleworks Lab at the Johnson Space Center. Tests were conducted in August 2013 and January 2014. Additional testing is scheduled within the next several months. During the August, 2013 tests, the Cannae Drive article produced between 30 and 40 uN of force on the NASA torsion pendulum. In addition, an unslotted blank cavity also produced similar thrust. A termination unit used in place of the cavities produced no thrust. NASA and Cannae are working on upgraded testing. NASA is publishing results from the August 2013 test program.
Pros:
A reaction-less drive would be a violation of laws of physics (which can be a good thing and lead to better models)

Cons:
With the current prototypes, the thrust is too small and a measurement error is possible

What do you think about it? Do you know similar devices?
Can the effect be explained and possibly increased with the ethereal mechanics models?